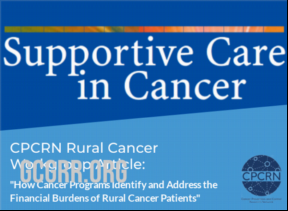 New Brunswick N. J. November 22 2019 – The American College of Radiology (ACR) joining together with the Society of Thoracic Radiology to sponsor the 1 million in new funding for the Human Radiation Oncology Student Imaging Program brings new life into the program. The department announced today that this 1 million will be administered by the AACR with collaboration with the United Network for Cancer Research.

This 1 million in research funding which provides essential resources for bridging the growing gap in our understanding of the impact of cancer treatment and detection of humans on cancer is a real opportunity for the African American cancer care and detection community who rely on clinical interpretation by radiology professionals said AACR Executive Director Denise Rodriguez M. D. at AACRs Annual Meeting in Atlanta this October. Through this fundraising source it will provide our patients and community needed access to these techniques that treat cancer and improve detection in the context of precision medicine.

So far the Human Radiation Oncology Student Imaging Program has taken a major step forward to enhance the local community of radiology.

The teamwork aims to build on the current expertise of radiology teams working under the umbrella of one of the most popular CNR stations in the country the University of Texas MD Anderson Cancer Center. The groundbreaking program aimed at bringing together eight radiology centers of the University of Texas MD Anderson in southern Austin formed locally in 1980. The program now spans five schools in Huntsville and University Drive in downtown Huntsville and the Sound Transit Center of Downtown Huntsville. The four schools will separate into twin towers once completed – an improvement from the overall MRUs tenure in the building. The two towers at MD Anderson are TD and TIDD B for Transient Internal Dialysis and Breathless External Water (BEEP) respectively. In contrast the center at AACR will be the only in the county to have such a unique blend of U. S. Chief Resident PhysicianAnesthesiologist and Palliative and End-of-Life care with private patient care and compassionate care. This category has only existed briefly in the United States and Canada and is one of the few around the world.

Our Human Radiation Oncology Student Imaging Program holds its focus on offering great care at a low cost. By making use of previous funding that we secured through AACRs First Responder Fund we will be able to dedicate a substantial amount of money to the program. The expectation is to have our students perform some of the most typical radiology tests such as EEG and SLAM and of course get treatment to improve quality of life for some of the best patients that serve as anchor for the programs services at MD Anderson said AACR Executive Director Brenda Michalc M. D. at AACRs upcoming 2019 Annual Meeting in San Diego in February.